The Curator Galleries are created by the Museum’s professional staff. They showcase a broad range of topics represented in the Grand Rapids Public Museum’s Collection. The Galleries are a resource for exploring new objects, topics of interest and current staff research projects for Museum exhibitions and programs. 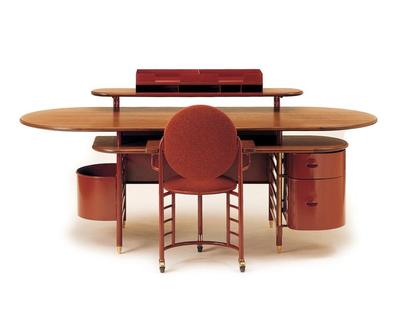 Featured Objects (26 items)
Enjoy this ever-changing selection of highlights from the Grand Rapids Public Museum's collection of over 250,000 artifacts and specimens.  The collections spans dozens of categories from automobiles to zoology and contain objects of local and inter-galactic significance which the museum uses to inspire curiousity and create a deeper understanding of our world. 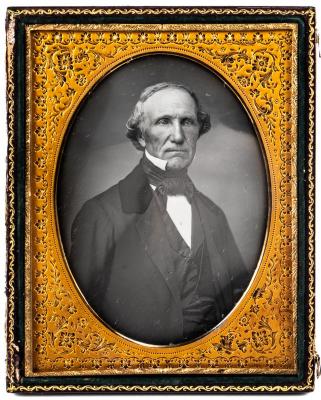 Cased Photographs (197 items)
The Grand Rapids Public Museum's collection of cased photographs consists of daguerreotypes, ambrotypes, and tintypes, some of the first photographic processes ever invented.  Most of the almost 200 photographs in this collection are portraits of the early residents of Grand Rapids, but many are unidentified. 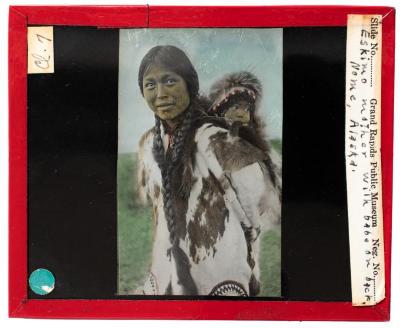 IMLS Lantern Slide Digitization Project (19 items)
Check out GRPM's newest digitization project! The Museum has thousands of lantern slides being added to the online database. These rare and fragile images were created in the late nineteenth and early twentieth century by GRPM staff as well as local and regional companies. They depict both local and international scenes, many with artistic hand-colored embellishments to bring the photograph to life.

The magic lantern slides were widely circulated in the Grand Rapids Public Schools for decades. In recent years, there has been a renewed interest in the slides by researchers. Their interest lies in the significant role magic lanterns played in the history of technology and also as a visual resource, especially for local history.

Thank you to IMLS for supporting this grant-funded project.

#askacurator - Fossils (10 items)
A fossil is the remains of an organism (plant or animal) that is preserved in rock.  The entire organism or only a small part of the organism can be preserved as a fossil.  Fossil remains can also be skin or body impressions of an organism or a trace left by an organism while preforming some activity, like walking, running, burrowing, or feeding.   Body fossils represent part or all of the body of an organism.  The hardest parts of an organism are usually preserved as a fossil, such as bones, teeth, shells, or the exoskeletons of insects or crabs.  The hard parts of an organism are most commonly fossilized, because they are the most heavily mineralized, making them resistant to weathering and destruction.  Think about how strong bones and teeth are compared to the soft, fleshy parts of a body, such as skin, muscles, or organs.  If the conditions are just right, the soft parts of an organism can be preserved in the fossil record, but this is very rare.  Hair, feathers, fingernails, and claws are not commonly found in the fossil record, because they are composed of a material called keratin, which isn’t as strong as bone, teeth, or shell.  Trace fossils are left behind while an organism is preforming some activity, such as tracks/trackways, burrows/borings, bite marks, or coprolites (fossil poop).  Trace fossils are important, because they provide information about the habits or behavior of an organism (how it moved, what it ate, or where it made its home).  Over 90% of all organisms never become a fossil.  An organism has a better chance of being fossilized if it is composed of a lot of hard parts, is very abundant, and lives in a lot of different habitats all over the world.  An organism is also more likely to become a fossil, if it gets buried under a lot of sediment quickly after it dies and it stays buried.  Even the hardest parts of an organisms will get quickly destroyed if they are left exposed to the weather or are allowed to be chewed on by other organisms.  The process of an organisms becoming fossilized typically happens very, very, slowly and will take 10,000s to 100,000s of years. 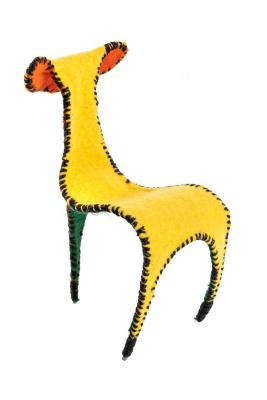 Chairmania (250 items)
Chairmania is a collection of miniature chairs collected and curated by George M. Beylerian. Each piece was carefully selected by Beylerian to represent important design concepts such as marketing, fantasy, transformation, ethnicity and culture, comfort, and Americana. Some pieces are actual salesman samples while others were created by famous artists, architects, jewelers, and designers. 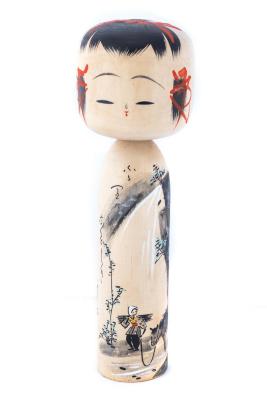 Kokeshi Collection (104 items)
Kokeshi are wooden dolls lacking arms or legs that were first produced in the Tohuku region of Japan. They were originally intended to be used as children's toys however they have become popular among collectors and are often used as decoration. Kokeshi can be categorized into two groups, traditional and creative. Traditional dolls are simple in design and are divided into eleven different types that coincide with the area they were created. These types have particular shapes and designs to help distinguish them. Creative kokeshi were first produced after World War II and feature unique designs, shapes, and colors that are not found in their traditional counterparts. 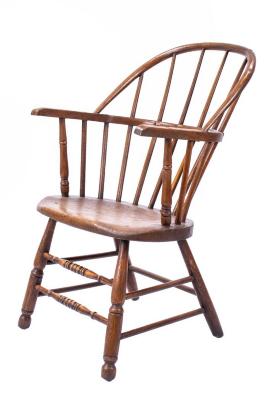 The Furniture Collection is one of the most historically significant of Grand Rapids Public Museum’s Collections. Composed of approximately 2,000 pieces of furniture, mostly manufactured in Grand Rapids in the nineteenth and twentieth centuries, this collection is internationally recognized for its scope and completeness.

Over 400 companies are represented within the collection, including early cabinetmakers like William “Deacon” Haldane, large Victorian-era firms like Berkey & Gay and Nelson & Matter, huge producers like the Michigan Chair Company and Imperial Furniture Company, well known residential companies like Kindel and Baker Furniture, as well as the office furniture and fixed seating concerns that changed the industry during the twentieth century like Steelcase, Herman Miller, and the Irwin Seating Company.

The furniture collection features pieces by some of America’s most notable furniture designers and artists such as Frank Lloyd Wright, George Nelson, Charles and Ray Eames, David Wolcott Kendall, T. H. Robsjohn-Gibbings, George Nakashima, and Alois Lang.The furniture represents a wide variety of pieces from hand carved, one-of-a-kind pieces to mass produced, plastic and metal stadium seating.  Taken as a whole, these objects offer a striking material history of the furniture industry and by extension the history and culture of Grand Rapids and its surrounding communities. 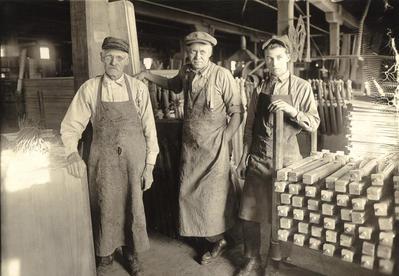 Rocks and Minerals (59 items)
The Grand Rapids Public Museum has thousands of rocks and minerals that have been collected over the last 160 years. These gorgeous gems come in all shapes, sizes and were collected from all over the world. The following group is a sampling as we work to inventory, catalog and photograph this exquisite collection. 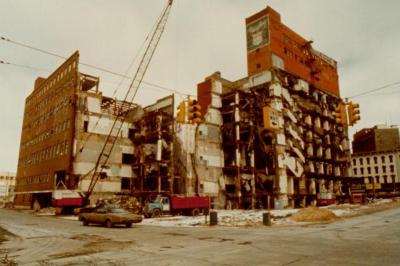 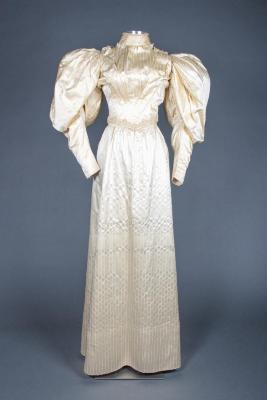 Here Comes the Bride! (57 items)
This gallery features a selection of wedding dresses from the Grand Rapids Public Museum's permanent collection. GRPM has over 200 wedding dresses dating back to the early 19th century. This collection of dresses was cataloged and photographed as part of a two-year collections stewardship grant awarded by the Institute for Library and Museum Services to enhance preservation and access to GRPM's collection of 10,000 clothing and accessories. 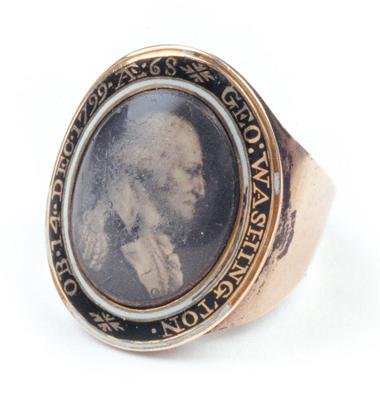 US Presidential Memorabilia (47 items)
This Curator Gallery features artifacts representing each US President. Click on their name to explore more related objects.