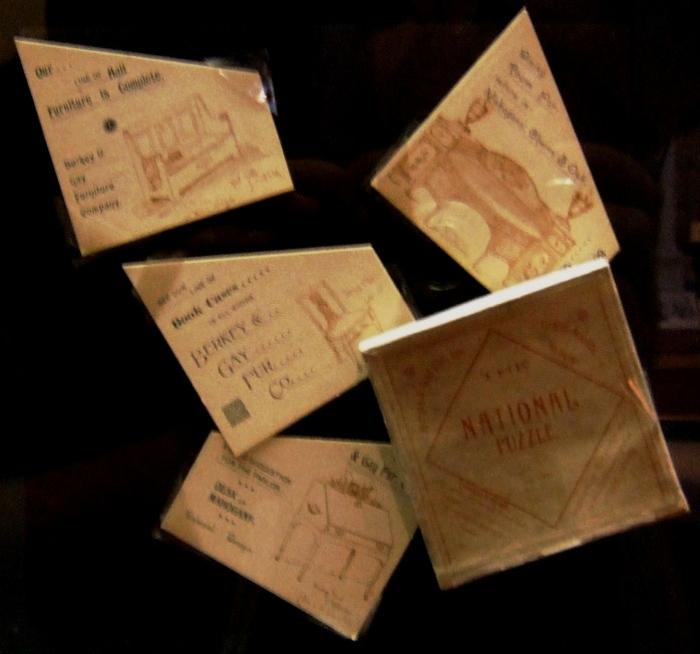 Furniture City (1994 – 2013)
Furniture City was one of the signature core exhibits installed at the Grand Rapids Public Museum's new Van Andel Museum Center when it opened in 1994. At approximately 10,000 square feet, the exhibit occupied a significant portion of the museum's second floor and contained hundreds of pieces of Grand Rapids Furniture. The exhibition was accompanied by the authoritative book on the subject, "Grand Rapids Furniture", by GRPM curator Christian Carron. The Furniture City exhibit told a comprehensive story of the Furniture Industry in Grand Rapids, from its origins in the years after the Civil War, up to the present day with office and fixed seating manufacturers like Steelcase and American Seating. The exhibition was significantly reduced in size in 2013 to make room for a new gallery and was closed in 2019.

COMPANY HISTORY
1859: Julius Berkey establishes a sash and blind mill with James Eggleston
1861: Julius Berkey and Alphonso Hamm begin making their signature scalloped walnut "Berkey table" at the sash and blind mill of William A. Berkey, but the partnership closes in less than a year.
1862: After his partnership with Hamm dissolves, Berkey forms a new partnership with Elias Matter
1863: Company becomes Berkey Brothers & Co.
1866: George Gay joins as a partner and the company name is changed to Berkey Brothers & Gay.
1866: George W. Gay becomes a partner in Berkey Brothers & Co.; the name is changed to Berkey Brothers & Gay.
1872: William Berkey withdraws from leadership of the company.
1873: Company is incorporated as Berkey & Gay.
1874: New six-story factory, with wholesale and retail showrooms, becomes one of Grand Rapids’ most prominent structures.
1875: Salesroom opens in New York City.
1876: Berkey & Gay is one of three Grand Rapids companies to win an award for its display at the Philadelphia Centennial Exposition.
1885: Firm advertises nationally, and ships over a half-million dollars in goods throughout the U.S. and Europe.
1900: Retail operations discontinued.
1911: Berkey & Gay acquires Oriel Cabinet Co.
1923: Wallace Upholstering Co. and Grand Rapids Upholstering Co. are merged with Berkey & Gay as the Consolidated Furniture Companies.
1929: Simmons Co. of Chicago acquires Berkey & Gay’s $10 million in assets, including 5 Grand Rapids plants with 1.5 million square feet of space, and $8 million in annual sales.
1931: Sales decline sharply; Berkey & Gay forced to declare bankruptcy.
1934: Stockholders win $2,000,000 judgment in a suit against Simmons, then the largest civil award in history.
1935: Berkey & Gay re-opens under new management.
1948: Company declares bankruptcy; name is purchased by Harvest Furniture Co. of Louisville, Kentucky and production ceases.

PERSONNEL
Many prominent names were associated with this largest of Grand Rapids’ residential furniture manufacturers. Brothers William and Julius Berkey were among the first to make the transition from sash and blind milling to furniture production. William H. Gay, the son of an early partner in the business, George Gay, became a prominent leader of both the company and the community and sat on the boards of many banks and civic organizations. After his death in 1920, George Whitworth and five members of the Wallace family, led by Winfred J. Wallace, took the reins of the company. Under their management, several plants were merged into the giant Consolidated Furniture Companies, which had its own newsletter, gymnasium, Americanization classes, sports leagues, and farm. They advertised aggressively directly to consumers in the most highly circulated journals of the day.
Cabinetmaker John Frohberg (or Froburgh) may have created designs for Berkey & Gay in the early 1870s. John Keck of Ann Arbor, Michigan, designed Renaissance Revival, Neo-Grec, and Eastlake-style pieces on contract for Berkey & Gay in the 1870s. Louis Bornemann became the company’s chief designer sometime after the Centennial Exposition, and left to work for Phoenix and finally on his own in 1886. Frederick Koskul and John Mowatt designed for Berkey & Gay between 1877 and 1879. Arthur Kirkpatrick, who grew up in Grand Rapids, received formal art training before he became a designer at Berkey  & Gay. He went on to found the Grand Rapids School of Furniture Designing in 1904. Adrian Margantin designed pieces in Golden Oak and Colonial styles for Berkey & Gay from 1898 until his death in 1914. Several designers, including Lachlan MacLachlan in the 1910s and Frank C. Lee in the 1920s, came to Grand Rapids via a sort of “pipeline” from the prestigious Waring & Gillow in London and W. & J. Sloane in New York. They brought with them considerable knowledge of classical decoration and period styles, which is reflected in the company’s products of the time.
Many Berkey & Gay designs required a considerable amount of hand craftsmanship, so the company cultivated large departments of carvers and decorators. Some including Fred Weber and Chris Haraldstadt, grew up in America but came from regions of Germany and Norway that were known for their carving traditions, and worked for forty years or more at Berkey & Gay. Others, like Florentine master carver Leopold Baillot, and Japanese decorator Fugi Nakamiso, were recruited through American foreign embassies to bring their experience overseas, to work for Berkey & Gay.

PRODUCTS
Because of the company’s size and longevity, collectors seem to encounter Berkey & Gay products more frequently than those of any other Grand Rapids company. Its inventory of lines was quite large and varied over time; only a brief overview is included here.
1866 - 1890: From its very first machine-made, scalloped, walnut, and cherry “Berkey Tables,” the company’s products were made for wholesale shipment and sale to the masses. Berkey & Gay capitalized on the public’s interest in whole suites of “suits” of furniture, which included everything needed for bedrooms and dining rooms. Pieces were also manufactured for the hall and office. Much of the company’s early production was likely shipped “in the white” (unfinished), to be finished by the retailer upon arrival. Some pieces, however, were given painted faux burl panels at the factory. Large contracts for bedroom suites were supplied to hotels in Washing and in New York at Coney Island and Manhattan Beach.

With its introduction to the country at the 1876 Philadelphia Centennial Exposition, it became known for production of massive Renaissance Revival beds and secretaries. Typically of walnut and walnut burl, with lower-end suites in ash, they were decorated with multiple layers of geometric and architectonic panels and carvings. In fact, Berkey & Gay’s products of this period have become synonymous with the term “Grand Rapids furniture” in the minds of many collectors.
An 1878 article in the American Cabinetmaker says the company “makes a specialty of bevel plate mirrors in their finer work.” The article revealed that sides and ends of drawers were produced in red cedar to prevent moths. It also noted that Berkey & Gay did not make its own parlor frames, but purchased them from Holton & Hildreth of Chicago, then completed the upholstery for its own retail trade.
Eastlake style suites from the late 1870s and ‘80s were equally massive. Some at the higher end demonstrate a keen knowledge of Eastlake’s principles of design and stand apart from the company’s other medium-grade lines.
1890 – 1915: As consumer style preferences changed, so did Berkey & Gay, but the feeling of massiveness and strength in its furniture remained. The company continued to produce whole suites for the parlor, bedroom, and dining room. Pieces were in Golden Oak or mahogany. Berkey & Gay’s Golden Oak pieces have very high relief in their carving, which ranged from grotesque fantasy creatures to swirling French flourishes.
A few Arts and Crafts style suites were introduced in the first decade of this century under names like “English Modern,” but generally speaking Berkey & Gay passed on the whole movement.
1915 – 1931: The era between World War I and the Great Depression was Berkey & Gay’s zenith of production. Upholstering was spun off to subsidiaries like Wallace Upholstery and Grand Rapids Upholstery, so Berkey & Gay concentrated on living room and bedroom suites. Although designs ran the gamut of freely translated European and American revival styles, most tended toward larger, heavier periods like Elizabethan, William and Mary, and American Empire.
The pieces were well constructed. A variety of woods was used, mostly dark mahoganies and walnuts, with occasional accents of lighter woods, painted decoration, or exotic materials like turquoise. These were further darkened by the application of stains wiped around edges and carvings, to give the appearance of age.
One interesting novelty was the "Old Ironsides Table,” of which only about 100 were produced. Its scalloped apron and block-turned legs and stretchers were adapted from an illustration in a Wallace Nutting book on American antiques. An eagle medallion on the single drawer front was carved in wood taken from the U.S.S. Constitution, during its restoration in Boston Harbor.
1934 – 1948: Berkey & Gay had ventured into Modern or Art Deco designs before it was closed in 1931, and continued to produce both “traditional and modern” lines when it re-opened. Kem Weber contracted to design a Modern line, but his relationship with the company turned sour over its financial difficulties.
The popular frenzy over the novel and movie Gone With the Wind inspired Berkey & Gay’s “Old South Line” in the late 1930s. It featured Victorian Revival parlor chairs and full and half-tester beds.
Other Sources
Both the Grand Rapids Public Museum and the Grand Rapids Public Library have large collections of advertising pieces and company histories as well and trade catalogs from Berkey & Gay.

MARKS AND LABELS
A Berkey & Gay table, circa 1875, in the collections of the Public Museum bears a black stencil of the company name on the underside of its stretchers. The underside of marble tops from the same period were sometimes scored with the initials “B&G” by the local marble supplier. Paper labels that read “From Berkey & Gay Furniture Co. Grand Rapids, Mich.” were used in the 1880s and ‘90s, and have been found on the back of case pieces, and under the upholstery on chair armrests.
By 1905 Berkey & Gay had adopted a new trademark consisting of a series of concentric rings. A circular line surrounds the words “BERKEY & GAY FURNITURE” which surround a “C” with the “O” as the center. This mark appeared as an inlaid wood tag or paper label for a short time, then was replaced by a brass tag. When the company changed owners in 1929, “DIVISION OF SIMMONS CO.” was added between the “C” and the company name. From as early as 1929, the Simmons line was sometimes replaced by “TRADEMARK-REG.U.S. PAT OFF”. 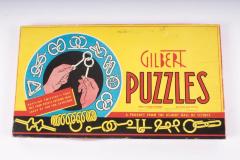