The Indian Motorcycle Company produced approximately 32,000 bikes in 1913, the peak of its production. The Indian Model E Motorcycle in the Museum’s Collection was manufactured in Springfield, Massachusetts, and the odometer reads only 1,220 miles. Indian was an innovative company, constantly looking for ways to make the motorcycle more efficient. It was the first major American manufacturer to offer front- and rear-wheel suspension. By reducing fatigue and increasing comfort, Indian was able to make the motorcycle more appealing, allowing for greater acceptance of the motorcycle as a replacement for the standard bicycle.   The company developed an innovative piece of engineering, the cradle spring frame which allowed for a smoother riding experience (the company advertised, “like riding on air”). 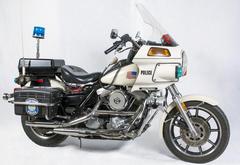 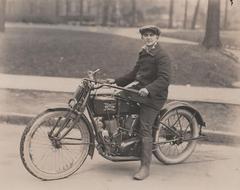