The clock consists of original and modern clock faces, hands, mechanisms, gears, weights, pendulum, etc. from the Grand Rapids City Hall Tower Clock.;The Grand Rapids City Hall Clock Tower has a long and interesting history. The clock was built in Boston c. 1880 by the E. Howard Clock Tower Company. It was then sent to Grand Rapids where it was installed in the new City Hall in 1888. The clock marked time in downtown Grand Rapids for 81 years until City Hall was torn down in 1969. The clock was saved from demolition and purchased by Dr. and Mrs. Peter Northouse, who donated it to the Grand Rapids Public Museum in 1982. The Museum then shipped the clock back to the east coast, to Freeport, Maine where it was restored to working condition. The clock was finally installed on the third floor of the Van Andel Museum Center, overlooking the Galleria, in 1994. Ever since, it has been chiming the hours and reminding museum visitors of its history.

Gift Of Northouse, Peter B.

W is for Watches and Clocks (after 1994)
An exhibit featuring timepieces from the museum's collections.  From tiny pocketwatches to huge grandfather clocks, from simple sundials, to complicated electronics - its all about time!

Science Tuesdays: Physics (June 2017)
Science Tuesdays is an ongoing educational experience, offering science programming based on changing themes each month. Science Tuesdays take place throughout the day on Tuesdays at the Museum and include a variety of activities and interactive displays. 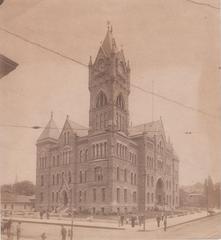