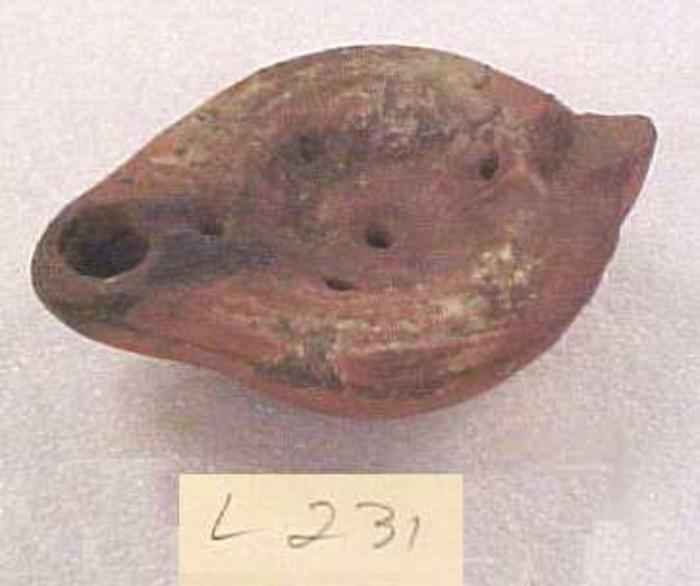 The ancient Egyptian view of the afterlife was similar to the present life, without the possibility of sickness or death. Therefore, many of the items found in tombs were everyday objects. Practical items were often buried beside the body to make sure chores could be completed and tasks managed. These grave goods included bowls, jars, pots, combs, necklaces, and palettes for grinding the mineral malachite to make up their signature green eyeshadow. Game playing dice and wool spinning spindles have also been discovered, as well as light-giving oil lamps.

Oil lamps are considered the first mass-produced object in history. Dating back about 200,000 years ago, early humans burned moss soaked in animal fat inside hollow stones or conch shells to ignite light. Throughout Egypt, lamps were shaped from stone or ceramic into small dishes that would hold a wick and beeswax or oil from olives, sesame, fish, or whales. Over time, new molding techniques sparked the design of a closed container and spout with elaborate decorations to match. These lamps burned bright in the homes, public places, and temples of ancient Egyptians and were often lit during religious ceremonies. Since many believed light was a blessing, oil lamps were frequently buried with the dead to illuminate the way into the afterlife and as votive offerings for the gods.

Other offerings entombed with the ancient Egyptians have included human and children figurines, flint knives, and statues of birds and animals, like cats, crocodiles, hedgehogs, hippopotamuses, frogs, and pigs. These gifts to the gods demonstrate prayers of hope or thanksgiving in regards to fertility, health, and prosperity. A popular form of public worship, votive offerings were often dedicated at sacred sites, though many have been discovered in small private chapels and personal household shrines.

Virtual Discovery Kit: Egypt (April 2020)
This Collection will introduce you to ancient Egyptian beliefs in life and the afterlife. Widespread settlement began in ancient Egypt around 8,000 years ago in 6000 BCE, and the first pyramids of Egypt were built approximately 4,000 years ago, around 2000 BCE. Many of the items in this Collection are from this period!