The following biography was derived from the Furniture City History collection of the Grand Rapids Historical Commission:

J. Stuart Clingman, born October 18, 1882 in Chicago, grew up around furniture. His father, George Clingman, was the general manager of the Toby Co. of Chicago. In 1900 Toby introduced a collection of mission furniture designed by George Clingman, which set the stage for Gustav Stickley's New Furniture collection. Clingman received training at the Chicago Manual Training School, decorative design at Chicago Art Institute, and architecture at Armour Institute. Following that he traveled in London and Paris. On his return he designed special order furniture for Tobey's custom shop. Alexander W. Hompe, president and designer of Royal Furniture Co. persuaded him to come to Grand Rapids in 1903. He was director of design for John Widdicomb Co., and for thirty-two years was associated with Robert W. Irwin as chief designer and vice president. He was an internationally-known furniture designer. His best work was in traditional design. He died on December 27, 1956 at the age of 73.

James A. Straub
James A. Straub was a Collections department volunteer and Collection Committee Member at the Grand Rapids Public Museum, offering his services as an art historian. Among his many life accomplishments were his family, and serving in the United States Marine Corps, including a 13-month tour of duty in Vietnam. His list of achievements include 27 years as Detective Lieutenant from the Kent County Sheriff's Department, Original Catalogue Director of the Mathias Alten Catalogue Raisonne, and providing significant contributions to the book, Mathias Alten: Journey of an American Painter.

Jim was honored to have been appointed by Gov. Milliken to the Board of Forensic Polygraph Examiners and by the GR mayor to the GR Historical Commission. Additionally, Jim served as President of the Command Officers Bargaining Unit at the Kent County Sheriff's Department and Vice President of the GR Historical Society. Along with his dedicated service to GRPM Jim was also a member of the Board of Kent County Employees Credit Union, the Kent County Pension Board, the Art Advisory Committee for Butterworth Hospital, the Acquisitions Committee at the Grand Rapids Art Museum and the GVSU Gordon Gallery Advisory Committee. 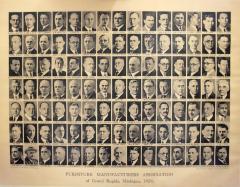