Ancient Egyptians believed life after death was very similar to life before death. The deceased would be welcomed into an identical home by family, friends, and pets who had already passed away to enjoy food, gatherings, and hobbies, without fear of sickness or loss. Similar to the land of the living, each person was expected to carry out their daily chores for the greater good, unless the individual owned a shabti. These small statues, made of ceramic, stone, or wood, were known as “The Answerers” and were placed in tombs to magically perform tasks for their master in the afterlife. Engraved with a spell, known as the shabti formula, the figures would answer their owner’s call of duty when needed. These helpers were carved into the shapes of adult mummies and even held the tools for specific trades, like baskets, hoes, or chisels, in their hands.

Before death, both commoners and kings would purchase shabtis from temple shops. The greater a person’s wealth, the greater their workforce in the afterlife. When these figures were first employed, around 2100 BCE, a single statue was all that the deceased required. However, by the time of Tutankhamun in 1300 BCE, tombs of the rich and famous housed at least 365 shabtis, one for each day of the year. These willing workers were in such high demand that shabtis are the second most common artifact from ancient Egypt, the first being scarabs.

Mysteries of Egypt (November 21 1999 – March 26 2000)
Mysteries of Egypt was a traveling exhibit organized by the Canadian Museum of Civilization in the 1990s.  It featured authentic and reproduction artifacts from ancient Egypt.

Virtual Discovery Kit: Egypt (April 2020)
This Collection will introduce you to ancient Egyptian beliefs in life and the afterlife. Widespread settlement began in ancient Egypt around 8,000 years ago in 6000 BCE, and the first pyramids of Egypt were built approximately 4,000 years ago, around 2000 BCE. Many of the items in this Collection are from this period! 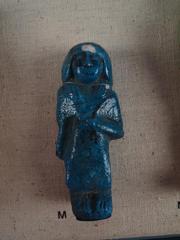 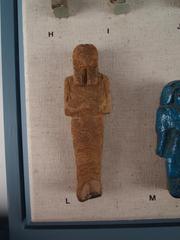 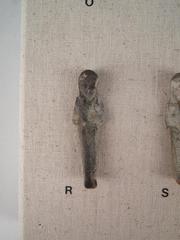