Embossed and chromelithographed rectangular box, red with scenes from the movie superman starring Christopher Reeve. Metal clasp on top holds together box and hinged lid. Red plastic handle. Wire holder inside secures plastic drink thermos with attached cup.;Lunch box will be exhibited in Collecting A-Z, B is for Boxes. It is a good example of the influence of films, comic books and cartoons on popular culture. It is also a typical item used by many school children of the era.;On front and back, Copyright @ DC COMICS INC., 1978... 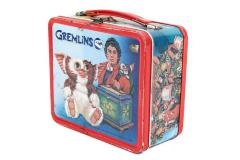